Santam, South Africa’s largest general insurer, today reported strong underwriting results and acceptable growth for the six months ended 30 June 2016. In a low-growth economic environment, the group reported gross written premium growth of 8% and a net underwriting margin of 6.4% (2015: 8.9%) – well within the target range of 4% to 8% of net written premiums.

In announcing the results, Santam noted that the group paid out R7 billion in claims over the period. The claims cost included R231 million relating to drought claims, providing relief to farmers reeling from South Africa’s worst drought in 20 years.

The lower underwriting profits compared to the exceptional performance in 2015, and significantly lower investment results reduced headline earnings per share by 29% to 633 cents compared to June 2015. An annualised return on capital of 17.4% was achieved.

The motor and property classes of business were positively impacted by continued disciplined underwriting, including a significant improvement in the underwriting results from business on outsourced platforms. The impact of the catastrophic hail events in Gauteng and the North West in January 2016 was reduced by recoveries from a reinsurance catastrophe programme.

The property class achieved strong growth of more than 12% on the back of increased corporate property business written in the rest of Africa, and good growth achieved by the Santam Re property portfolio.

The motor class benefitted from 20% growth reported by MiWay, the direct insurance business (gross written premium of R1 003 million). MiWay achieved a claims ratio of 63.1%, up from 60.8% in 2015, mainly due to the impact of significant new business growth and an increase in motor-parts cost following the weakening of the rand in 2015.

Lambrechts said that, despite the severe drought conditions and large payouts in gross drought claims, the crop insurance business reported a net underwriting profit of R8 million. “This was as a result of disciplined underwriting and few hail-related claims during the crop season.”

Investment returns were significantly lower compared to 2015. Foreign currency losses of R46 million were reported following the 5% strengthening of the rand from December 2015 levels.

The transaction to acquire a 30% shareholding in Saham Finances, together with SEM, announced in November 2015, was finalised during the first quarter of 2016. Saham Finances is the insurance arm of the Saham Group and operates in 26 countries across North, West and East Africa, and the Middle East. It is the largest insurer in Africa, excluding South Africa. The acquisition was structured through a special purpose vehicle held jointly by SEM (75%) and Santam (25%).

The group solvency ratio of 51% at 30 June 2016 exceeded the group’s target solvency range of 35% to 45% of net written premiums. With the expected introduction of Solvency Assessment and Management (SAM), the new regulatory framework for insurers, in 2017, the group will target an economic capital coverage range of 130% to 170% going forward. The group economic capital coverage ratio at 30 June 2016 was 178%. The group is in the process of applying to the Insurance Regulator to use the Santam Regulatory Internal Model to determine its regulatory capital. Taking into account the group solvency ratio at 30 June 2016, the current and future regulatory solvency requirements and further potential acquisitions, the board has declared a special dividend of 800 cents per share. Effective management of the impact of regulatory developments will remain a key focus area.

Looking ahead, Lambrechts said trading conditions in the South African insurance industry remain very competitive in a low-growth economic environment. “This equates to almost no growth of insurable assets for the insurance industry. We will continue to focus on the optimisation of the claims and procurement value chains to increase efficiency and counter the impact of the weakening rand.”

She said the group’s focus remains on profitable growth in South Africa and to increase its international diversification through the Santam Specialist Business and Santam Re. “A strategic focus area will be to support the development of the SEM general insurance businesses in emerging markets by allocating appropriate technical resources. In South Africa, Santam will maintain its focus on cost-efficiencies, continue to develop the group’s full multichannel capability and MiWay’s business insurance and broker-direct offerings, as well as the MiWay Life insurance initiative in conjunction with Sanlam Life,” Lambrechts concluded. 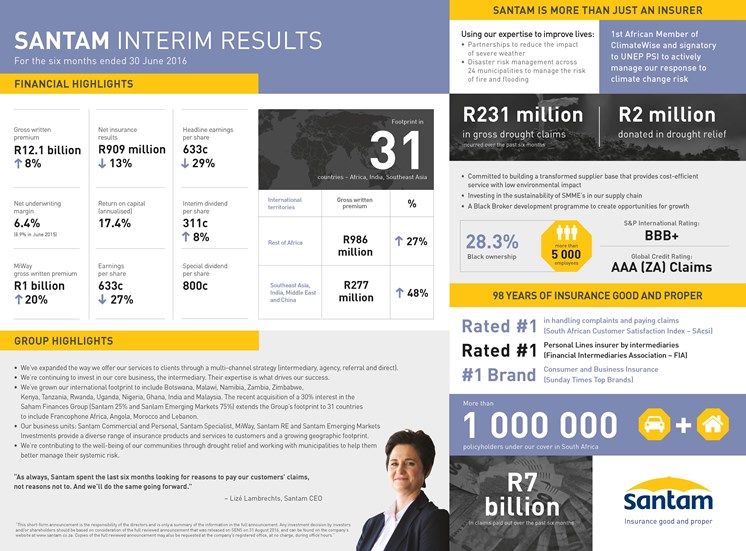 The Board of Directors of Santam Limited is pleased to announce the appointment of Tavaziva (...

Santam is pleased that a judgment handed down today by the Supreme Court of Appeal (SCA) has ...