Although the term “Multi-risk insurance” indicates that more than one risk is covered, most multi-risk insurance claims in South Africa arise as a result of drought. Multi-risk insurance is exactly what the term implies, namely that it provides comprehensive cover provided that sound farming practices are followed. The individual client is measured in terms of his own historical crop and the difference between the guaranteed crop and the harvested crop is paid out as a claim.

What is the situation regarding multi-risk crop insurance in South Africa?

An estimated 20% of the total summer grain area in South Africa is covered under multi-risk crop insurance. It plays an important role as security for producers who make use of input financing. Multi-risk crop insurance has always played an important role in ensuring that producers can farm sustainably, especially in the past few years of drought.

Multi-risk crop insurance should not be seen in the context of a single year but in a longer time context. History has shown that production conditions and rainfall are often grouped in a succession of wetter or drier years. Take, for example, the drought from 1964 to 1967, 1982 to 1987, 1991 to 1996 and then the drier years from 2001 to 2007 (See Figure 1 as an example for North West Province). Short-term results are often “skewed” as a result of these consecutive dry or wet years. However, the problem is that when claims did occur, large amounts were involved. From an insurer’s point of view this is also problematic as enough money has to be allocated to ensure claims can be paid out in these “catastrophic” years. Drought occurs over large areas, comcomitant with substantial claim amounts, and not sporadically as in the case of hail, for instance. The cost of keeping this capital available is high as it cannot be used for something else. Capital of at least six times the premium income must be reserved. In the case of hail insurance it is a fraction of this. 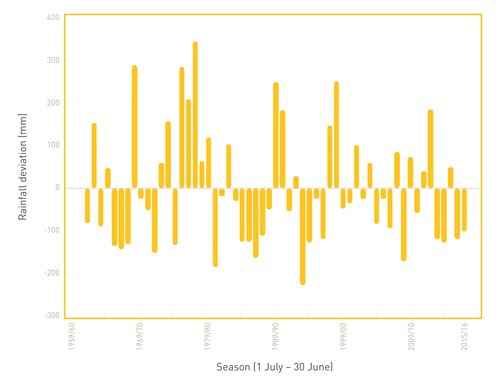 Figure 1: Annual (seasonal) total rainfall expressed as the deviation (mm) from the mean for North West Province since 1959/60

Large multi-risk claims as a result of drought damage in three of the past four years had a significant impact on the long-term results of multi-risk insurance. This led to limits being introduced on this type of insurance in recent seasons. For example, existing clients were given preference with regard to reinsurance if the risk was acceptable. Consequently it is important that ‘n long-term insurance history be built up between the insured and the insurer. This enables the insurer to consider individual rates for clients and offer lower rates to farmers who practise good risk management. If insurance is taken out only in bad years, rates will simply continue increasing.

No other insurance product offers the comprehensive cover provided by multi-risk insurance. This is one of the reasons why it is relatively expensive. Although it is labour intensive for the insurance company, the cost of managing it is relatively low compared to the insurance cost of covering the risk. However, remember that if an insurance product is expensive, it is usually also an indication of the risk the producer has to bear in mind. For example: The multi-risk insurance rate as a percentage of the insured value is more than three times higher in Lichtenburg in North West than it is in Middelburg in Mpumalanga. Why? An analysis has shown that over the long term the probability of input costs not being recovered in Lichtenburg is about 30%. In other words, a farmer in Lichtenburg will have a loss in three years out of ten. This figure obviously depends on the commodity price, with the calculation based on a maize price of approximately R2 500/ton. With lower prices and higher input costs the number of years in which losses are made could increase. On the other hand, a good farmer in Middelburg, Mpumalanga would fail to break even in only about 10-15% of the years.

How insurable are the grain production areas in South Africa?

This question could also be worded differently: How feasible and sustainable is grain production in its current form? It is not only drought that causes poor crops and the resultant losses. The same applies when lower commodity prices occur. Rising input costs also substantially increase the risk of losses. Successive bad years make sustainability difficult for it is not easy to make up for two or three crop failures. Every producer will have to think strategically about whether his production system is sustainable in the long term. It might be advisable to change the type of farming or farming system in good years, as in times of drought nothing much can be done expect to try to survive.

Is Agritourism the future for farmers?

A 2019 survey found just 24% of South African farmers are hosting some form of agritourism on...

The 2021-‘22 wine grape season has been a successful albeit expensive one thus far. Productio...